The Thousand Islands Antique Boat Show  How it all started.... by Dr. William Heady 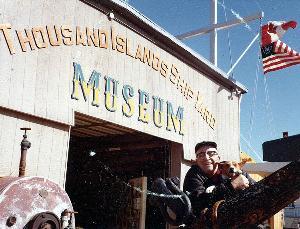 Tom Turgeon who, with his son Bill, owned and operated the Thousand Islands Marina, now known as Remar Marina, located around the corner from the present Antique Boat Museum.

Tom had lived among and worked on the boats of the Thousand Islands all of his life. His grandfather had gone down with a great lakes schooner off Sandy Pond when Tom was just a young lad. One summer day in 1964 a gentleman and his wife were walking through the marina with Tom when they noticed an old wooden boat on blocks in a corner of the building. They went home but couldn't erase the picture of that graceful, old boat from their minds.

A few days later they returned and inquired as to the boat's owner. Tom told them that he had taken it in payment of a bill owed to him by the previous owner, and he agreed to sell it for the amount of the bill - just a few hundred  dollars. The couple agreed to buy the boat and asked how it could be restored. Tom replied that he had a craftsman, Glenn Jackson, who was quite capable of restoring it, and a price was agreed upon for the work to be done during that winter when the marina's work load would be minimal
.
When the couple returned the following spring, they were thrilled with the appearance of their long slender launch with her gleaming white hull, and richly grained mahogany foredeck stretching endlessly before them. Since they had several friends with old, wooden boats in their boathouses, they invited those friends to join them in displaying their boats. This plan was discussed with the officials of the Clayton Chamber of Commerce and the Clayton Village Board, who agreed to provide some publicity for this event, as well as dock space to display the boats. About twenty boats appeared that first year, with many of their  crews in period costumes.

The next year, 1966, it was decided that this event would be a great addition to the activities of Clayton's Old home Week, so the chamber published the event in its bulletin and included it in all of that summer's other advertising. Esther Levy, Publicist for the Thousand Islands International Council also entered the picture, enhancing the chamber's efforts. This time, there were nearly forty boats entered, and Clifford Carpenter, Editor and Publisher of the Rochester Democrat-Chronicle, was present with his camera. He interviewed exhibitors, took many pictures, and wrote an article entitled "The Floating Smithsonian" which appeared in the July 1967 issue of Yachting. He returned   the following year as a judge for the Third Annual Antique Boat Show.